It’s not often you have a chance to own a Guinness World Records diamond, considered the largest cut in the world at one point (as also reported by Gübelin and the GIA). But now, The Enigma, a carbonado or black diamond weighing 555.55 carats with exactly 55 facets, is making its public and open market debut in a Sotheby’s London auction (Feb. 3–9). 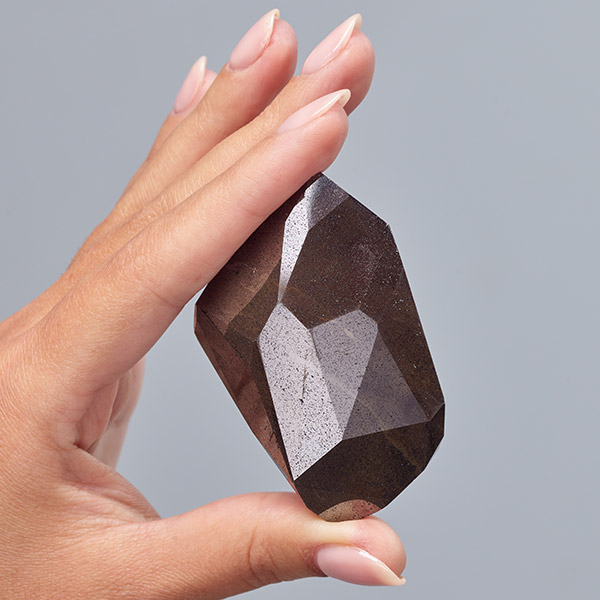 “This diamond is a true natural phenomenon. Much more than a jewel, it is a unique and precious object of curiosity,” says Nikita Binani, Sotheby’s London deputy director and jewelry specialist, in a statement. “This diamond has been treasured for over two decades by the owner, and the diamond itself has never been exhibited publicly or offered on the open market, so we are thrilled to have the opportunity to tell its story to the world. Its sale represents a once-in-a-lifetime opportunity to acquire one of the rarest, billion-year-old cosmic wonders known to humankind.”

The stone’s origins are mysterious. It’s thought that a meteoric impact or a diamond-bearing asteroid that collided with Earth created The Enigma, making it one of the toughest diamonds in existence, according to Sotheby’s.

And while a marvel to look at, with its delicate cut and precise polish indicating high-level skill, the black diamond isn’t just for show. Shaped after the Middle Eastern Hamsa symbol, the piece represents protection, fortune, and strength. The symbol is also associated with the number five, playing on the figures of the stone’s weight and facets.

Currently in Dubai, United Arab Emirates, the diamond will travel to Los Angeles (Jan. 24–26) and then to London ahead of the single-lot online auction. It will be offered without reserve, with purchases accepted in cryptocurrency. “This is the first time we are introducing our cryptocurrency offering in the UAE, a move that is in line with the government’s own commitment to exploring new digital, technological, and scientific advances,” said Katia Nounou Boueiz, head of Sotheby’s UAE, also in a statement.